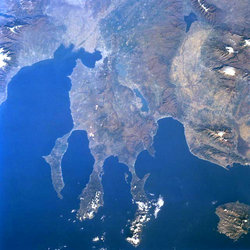 Satellite image of Chalkidiki and Thessaloniki

Chalkidikí or Chalcidice (in Greek: Χαλκιδική, alternative romanizations Khalkidhikí and Halkidiki) is one of the fifty-one prefectures of Greece. It is located in the southeastern portion of Macedonia. The Cholomontas mountains lie in the northcentral part. It consists of a large peninsula in the northwestern Aegean Sea, resembling a hand with three "fingers" (Pallene (now Kassandra), Sithonia, and Athos). The monasteries of Mount Athos are located on the easternmost "finger".

In ancient times, Chalcidice was part of Thrace until conquered by Macedon. The first Greek settlers in this area came from Chalcis (the area around Chalcis was also known as Chalcidice) and Eretria, cities in Euboea, around the 8th century BC who founded cities such as Mende, Torone and Scione, a second wave came from Andros in the 6th century BC. The ancient city of Stageira was the birthplace of Aristotle.

Capital of Chalcidice is the city of Polygyros, located in the center of the peninsula.

In June 2003, at the hotel Porto Carras located in Neos Marmaras, Sithonia, European Union leaders created the first draft of the European constitution.

The only prefectural boundary is with the Thessaloniki prefecture located to the north. 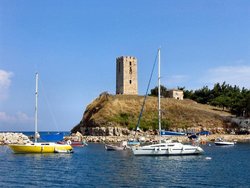 See also: List of settlements in the Chalcidice prefecture