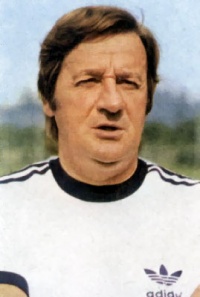 During his career as footballer he played for Hungarian sides Vasas Budapest and Honved Budapest. Lorant was also a member of the so called Mighty Magyars who managed to astonish the world with a 3-6 win over England at Wembley. That was the first time England lost at home to a team from the mainland.

Other great achievements of Lorant and his team were Olympic gold at the 1952 Olympics in Helsinki and the second place at the 1954 World Cup in Switzerland. In the “Wunder von Bern” Hungary lost to West-Germany with 3-2 after being in front of the score with 2-0 after only eight minutes of play. Lorant was capped 37 times for Hungary.

Lorant was coach of PAOK in the 1975/1976-season. In that season the side from Thessaloniki won its first Championship. Later on he coached Eintracht Frankfurt, Bayern Munich and Schalke ‘04 before returning to PAOK in the summer of 1980.

During a game between PAOK and Olympiakos at Toumba on May 31, 1981, Gyula Lorant suffered a heart attack during the game, and the doctor Vasilis Chalvatzoulis tried to keep him alive by "opening" him up and keeping the heart beating while waiting for the emergency ambulance to make it to Toumba. Unfortunately Lorant left his last breath in Toumba Stadium.