He was active in the resistance against the occupation forces during the World War II, and took part in the antidictatorial struggle against the military regime of George Papadopoulos within his organization, the Socialist Democratic Union from his exile outside Greece. He was also a regular contributor to the Deutsche Welle programme in Greek during the same period.

A founding member of the Panhellenic Socialist Movement (PASOK) and close associate to Andreas Papandreou, Papoulias was elected MP of Ioannina in the legislative elections of 1977, 1981, 1985, 1989 (June and November), 1990, 1993, 1996 and 2000. He served in many important government offices, including: 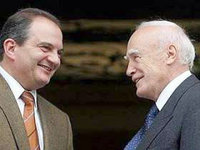 On December 12, 2004 Greek Prime Minister Costas Karamanlis, leader of the New Democracy governing party, and George Papandreou, leader of the PASOK major opposition party, nominated him as a candidate for the presidential election. He was elected on February 8, 2005, by an overwhelming parliamentary majority of 279 votes to serve a five-year term. On March 12, 2005 he was sworn in President of the Hellenic Republic.

Papoulias was re-elected on February 3, 2010 with 266 votes. He was succeeded in 2015 by Prokopis Pavlopoulos.

Karolos Papoulias was married to Maria Panou. The couple had three daughters. Apart from his native Greek language, he spoke German, Italian and French.

Papoulias was a volleyball player in his youth and even played for the National Volleyball Team of Greece. He was also a track and field athlete and served as chairman of the National Sports Association.