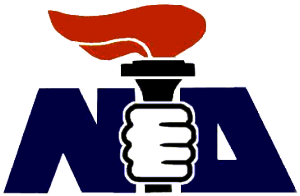 New Democracy or ND (Greek:Νέα Δημοκρατία, Nea Dimokratia), founded in 1974, is one of the main center-right liberal political parties in Greece. After an initial period of success, ND spent most of the 1980s and '90s in opposition. At the 7 March, 2004 Greek elections, ND returned to office under the leadership of Costas Karamanlis, nephew of the party's founder.

ND was founded in July 1974, two months after Constantine Karamanlis was sworn in as the first Prime Minister in the post-dictatorship era in Greece. Caramanlis had been Prime Minister twice before. In the first free elections of the new era, ND won by a landslide, securing 54.4% of the vote. It is higly disputable, however, that ND had such an influence to the electorate; it was considered as a "Karamanlis or tanks" dilemma, with the latter referring to the military, which still held a political influence.

Caramanlis intended ND to be a more modern and progressive right-wing party than those which had ruled Greece before the 1967 military coup. The party's ideology was defined as "radical liberalism," a term defined by ND as "the prevalence of free market rules with the decisive intervention of the state in favour of social justice."

In 1977, ND again won national elections. Under Caramanlis Greece redefined its relations with NATO, and tried to resolve the Cyprus issue following the Turkish invasion. In 1980, however, Caramanlis retired. His successor, George Rallis, was defeated at the following elections by the Panhellenic Socialist Movement (PASOK) led by Andreas Papandreou. Under ND leadership Greece joined the European Union in 1981. Karamanlis was then charged by opposing parties for not allowing a referendum, since the majority of people rejected the prospect of entry.

ND returned to power in a minority government under Constantine Mitsotakis in 1989, and a year later it formed a majority government after new elections. The party then suffered a period of successive loses. It was defeated in 1993 under Mitsotakis, in 1996 under Miltiades Evert, and in 2000 under Costas Karamanlis, nephew of the party's founder. In 2000 ND lost by the smallest margin in modern Greek history.

By 2003, however, ND was consistently leading the PASOK government of Costas Simitis in opinion polls. In January 2004 Simitis resigned and announced elections for March 7, at which Karamanlis faced the new PASOK leader, Giorgos Papandreou. Despite speculation that Papandreou would succeed in restoring PASOK's fortunes, Karamanlis had a comfortable victory in the elections and became Greece's first center-right liberal Prime Minister after eleven years. He won re-election but his majority was reduced to 1 seat in Parliamnet.

Papandreou, however, won their 2009 rematch placing ND once in the opposition. The defeat caused Costas Karamanlis to resign his post as party leader. He was succeeded by Antonis Samaras in a special election by party members on November 29, 2009.

Antonis Samaras won two elections in 2012 without, however, a majority, and had to rule as head of coalitions. After his defeat in the national elections of January 2015, he resigned and Vangelis Meimarakis was appointed head of the party.

Meimarakis lost the national elections of September 2015 and, in January 2016 was replaced in a special election of ND party members by Kyriakos Mitsotakis.