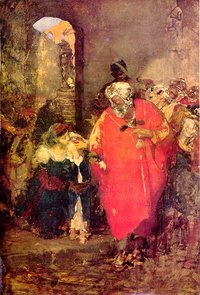 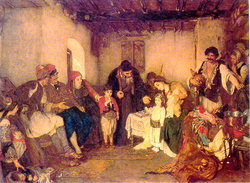 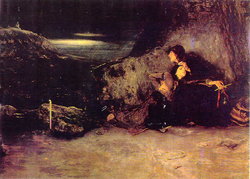 Nikolaos Gyzis is one of the greatest painters ever to come out of Greece.

Gyzis was born on March 1, 1842, in Sklavochori, Tinos. He was one of six children of carpenter Onoufrios Gyzis and his wife Margarita. Very early in life Gyzis showed an interest in art - painting in particular - and, at age 8 was admitted into the Athens School of Arts, though the proper age of admission was 12. The family moved to Athens and Gyzis followed the curriculum as an observer for the first four years and as a student after that until age 22 (1864).

In 1865, thanks to efforts by his artist friend, Nikiforos Lytras and interest by a wealthy sponsor - Nikolaos Nazos - Gyzis obtains a scholarship at the Munich Academy of Art where he studies under Karl von Piloty. The scholarship money often leaves the young student short so Gyzis paints on his own to support himself. His paintings have no difficulty selling to interested buyers.

In April 1872, Gyzis returns to Athens and tours Asia Minor but returns to Munich in 1874 after collecting material to further his work. He will briefly return to Greece in 1877 to marry Nazos' daughter. In 1880, Gyzis is made an honorary member of the Academy of Fine Arts of Munich. On January 1, 1882, he receives a diploma of recognition and a medal from King George I of Greece. The following year he becomes a professor at the Munich Academy where he attains tenure six years later. Many other honours follow.