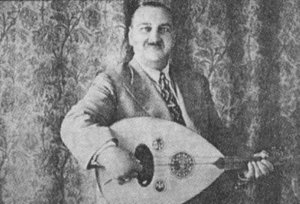 Agapios Tomboulis was born to Armenian parents in Constantinople, in 1891. Like many of Roza Eskenazi's associates, he came to Greece as a refugee in September 1922 after being expelled from Asia Minor.

Tomboulis was Greece's leading Oud player and he can be heard performing magic on hundreds of sides. He became a close associate of Roza's and she believed him to be the best Oud player and a very good singer too. Apart from performing alongside her throughout the 1930s at TAIYETOS taverna, he travelled extensively with Roza in the Balkans and Near East before World War II; and again to Constantinople in the 1950s where they cut approximately 40 sides.