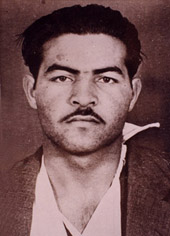 Andreas Dimitriou was a Cypriot guerilla fighter, one of the first two men executed by the British colonial authorities in the EOKA struggle (1955 - 1959).

Dimitriou was born in Agios Mamas, Lemesos province, on September 18, 1934. He lost his father early in life. He had a primary school education but did not complete secondary school.

He was one of the first persons to join EOKA and when the struggle broke out, on April 1, 1955, he operated in the Ammochostos harbour area where he worked. His biggest achievement was the theft of a large amount of British weaponry and ammunition after it was unloaded from the ship and before it could be stored in the local depot.

On November 28, 1955, Dimitriou shot and injured a British Intelligence agent named Taylor. He was himself injured and captured by Taylor's escorts and jailed.

Dimitriou was tried, convicted and executed by hanging on May 10, 1956, along with Michalis Karaolis. He was buried in the Imprisoned Tombs in the Central Jail of Lefkosia. The death of the two men sparked anti-British riots in Greece where 4 persons died and 200 were injured.