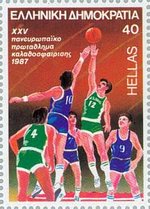 In 1987 the Greek basketball team won the European Championship.

Basketball made its debut in Greece in 1919, in Thessaloniki. A Greek student of Naismith’s from Springfield College, Michael Stergiadis, brought this new sport to our shores with the help of the Thessaloniki Young Men’s Christian Association (YMCA).

The first tournament was held in 1920, won by Panionios club. The first Athens championship, won by AEK Athens BC, was held in 1924-1925 as per the official site of Greek Basketball Federation (EOK).

The structure of basketball in Greece is well organized and provides many opportunities for young players to participate.

The best clubs in Greece make up the A1 League, which is professional in nature. These clubs often pay large salaries to their more experienced players and sponsor junior teams in which they own the rights to younger players. Although Hellenic Basketball Federation rules do not permit players to sign professional contracts until the age of 21, these clubs will sign players to personal agreements in which players as young as 16 years old will receive significant compensation for playing for the club.

The A2 League of Greece is also considered a professional league although it is not as competitive or financially stable as the country's highest league.

Below the A2 League is the B' Division and below that is the C' Division which is the lowest national basketball league in Greece.

There are also local leagues whose top clubs achieve promotion into C' Division.

Greece’s victory in the 1987 European championships was a defining moment for the sport in the country. The national team’s two points victory (103-101) over the Soviet Union in the final – with Nikos Galis, Panagiotis Giannakis, Fanis Christodoulou, Panagiotis Fassoulas and the rest of the team at their best - made Basketball the national team game. In the next few years, and in the mid-1990s, there was a series of victories in international sport meetings, both for the national team and at club level. Besides, the 1987 European Championship was only the first in a series of several major meetings and international finals hosted by Greece, the most important being the 1998 Men’s Basketball World Championships, held in Athens.

Greece’s own debut in Olympic Basketball was in Atlanta in 1996. The Greek team was partly the old guard from the glorious national team of 1987 (Giannakis, Christodoulou, Fassoulas, Patavoukas) and partly new young stars (such as Sigalas, Oikonomou, and Rentzias). It was an Olympic success, taking fifth place.