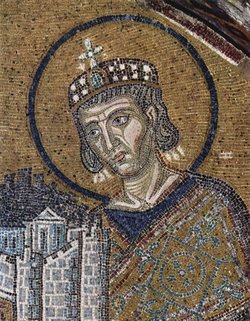 Gaius Flavius Valerius Aurelius Constantinus (February 27, 272–May 22, 337), commonly known as Constantine I or Constantine the Great, was proclaimed Augustus by his troops on July 25, 306 and ruled an ever-growing portion of the Roman Empire until his death. Constantine is famed for his refounding of Byzantium as "New Rome", which was popularly known in his time as "Constantine's City"— (Constantinopolis, Constantinople). Constantine is best remembered in modern times for the Edict of Milan in 313 and the Council of Nicaea in 325, which fully legalized and then legitimized Christianity in the Empire for the first time. These actions are considered major factors in that religion's spread, and his reputation as the "first Christian Emperor" has been promulgated by historians from Lactantius and Eusebius of Caesarea to the present day.

Gothicus had claimed the divine protection of Apollo-Sol Invictus. In mid-310, two years before the victory at the Milvian Bridge, Constantine reportedly experienced the publicly announced vision in which Apollo-Sol Invictus appeared to him with omens of success. Thereafter the reverses of his coinage were dominated for several years by his "companion, the unconquered Sol" -- the inscriptions read SOLI INVICTO COMITI. The depiction represents Apollo with a solar halo, Helios-like, and the globe in his hands. In the 320s Constantine has a halo of his own. There are also coins depicting Apollo driving the chariot of the Sun on a shield Constantine is holding and another (313?) shows the Christian chi-rho on a helmet Constantine is wearing.