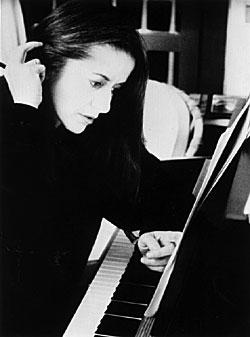 Composing on the piano 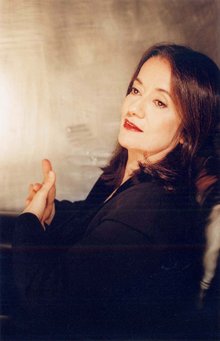 Eleni Karaindrou was born November 25, 1939, in Teichio, a small village surrounded by the mountains in the central Greece, and she grew up listening to the nature's sounds. "I still have in mind the memories of my youth: the sound of the wind, the rain, the silence, the snow and the folk music I use to listen during the village's festival, but also the polyphonic chants of the peasants and certain Byzantine melodies I heard in the church".

When she was eight, she went to Athens with her family and she begun playing the piano, the instrument she studied till the graduation at the town's Conservatory, fifteen years later. In 1967, the military coup of the colonels forced her to flee to Paris, where she studied ethnic music. There she played with jazz musicians and undertook a career as the composer of popular songs for some famous Greek singers.

In 1974 she started her lucky collaboration with cinema. In 1982, during the Thessaloniki Film Festival she met Theo Angelopoulos who invited her to write the music for his movie "Voyage to Kithira". It's the beginning of a winning collaboration. "I don't know why in the arts the relationships are often based on instinct or intuition. That's what happened between Theo and me. Since in the very first moment our collaboration was made of intellectual affinities". So it was just a natural harmony. "We never discussed the screenplays together", she revealed. "When Angelopoulos starts working, I use to ask him to tell me his myth. His way of speaking about the things he do is more useful for me than reading his screenplays. It's his vision that inspires me". So, Angelopoulos visions quickly melted with Karaindrou's piano compositions. ".as if I free my mind and my heart's visions. This allowed me to find the key for the movie soundtrack. In 'The Suspended Step of the York', my music also influenced the final.".

So some of the most important Anghelopoulos soundtracks were born: "The Beekeeper", "Landscape In The Mist", "Ulysses' Gaze" and "Eternity And A Day, that recently won the Cannes Palm d'or.

In balance between Classic tradition, jazz and Balkans culture, Eleni Karaindrou released compositions only apparently simply, starting from one thematic point that are dilated in a delicate sonorous mosaic. A kaleidoscope of sounds influenced by the Byzantine psalms and the Balkan folk (Greek, Serbian and Bulgarian, in particular). But in this music you can also find some traces of the New Age. Her instrumental themes flow slowly through a sequence of melodies, sometimes bare some other rich. A music always pervaded by a suffering and poetic soul. The result in the live concerts is exalted by the executions of a great solo musician, the violinist Kim Kashkashian, and by the performances of famous orchestras like the Stuttgarter Kammerorchester. But Eleni still considers herself as a popular music composer: "I like to hear people singing the 'Beekeeper' waltz in the streets of Athens". It was also the favourite theme of the actor Marcello Mastroianni. "Once he wanted me to play it all night long. Every time I came to the end, he gazed at me and asked: 'Please, Eleni, once again'".