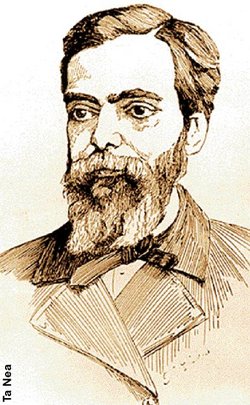 Emmanuel Roidis was born on the Aegean island of Syros, which had been in the hands of the Venetians until 1537, when it was conquered by the Ottomans. Its inhabitants were thus, in the main, Greek Catholics. Born in 1836 in Hermoupolis, the capital of Syros, to a family of rich merchants from Chios - who had fled the island after the massacre of its population by the Ottomans in 1822 - he spent much of his youth abroad. His family moved in 1841 to Genoa, where his father served as an honorary Greek consul.

It was there that the young Emmanuel first came into contact with the radical liberal ideas of the 1848-49 revolution. This marked him for life, as he himself would come to acknowledge. In 1849 he returned to Hermoupolis to become involved with the family business and pursue his literary career. He moved later to Athens where he settled in 1862, witnessing the expulsion of King Otto and the upheaval which followed. The transformation of this radical Anglophile Greek into a committed republican acutely aware of the injustice of authoritarian regimes, combined with his corrosive sense of humour and ironic irreverence, soon brought him into bitter conflict with the established church. His masterpiece, Pope Joan (Papissa Ioanna) published in 1866 - a scathing attack on official corruption and religious bigotry - earned him excommunication by the Holy Synod, a fact that enhanced his reputation as an author.