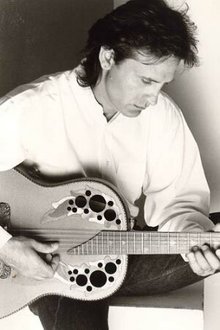 Giorgos Dalaras (Greek: Γιώργος Νταλάρας) is a famous contemporary Greek singer. He was born in Nea Kokinia, Piraeus on September 29 1949. His father was Loukas Daralas, a famous singer of rebetiko.

Dalaras' first song, called "Προσμονή" (="Expectation"), was recorded in 1967. Since then, he has recorded more than 120 records. He has sung numerous different Greek music styles (e.g. rebetiko, laiko, latin, pop) and he has collaborated with many contemporary Greek composers including Mikis Theodorakis, Stavros Kougioumtzis, Manos Loizos, Apostolos Kaldaras, Stavros Xarhakos and Manos Hadjidakis. He also discovered and supported little Areti Ketime, the first CD album of which, he produced.

In his 30 year singing career, Dalaras has performed in more than 120 concerts, including two historical concerts in the Athens Olympic Stadium, attended by more than 160,000 people, and many concerts dedicated to the Cyprus political problem.

Dalaras has sold more than 10,000,000 records in his career and is regarded as one of the biggest names in contemporary Greek music.

Apart from his prominent singing carreer, Dalaras is considered to be one of the greatest Greek musicians as he plays most of the stringed instruments of a Greek folk band with great success, including the guitar, bouzouki, baglama, tzoura and outi.