Difference between revisions of "Goran Vlaovic" 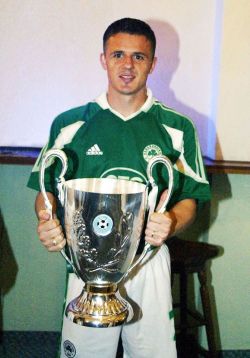 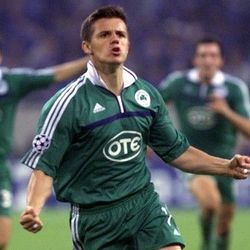 Goran Vlaović (born August 7, 1972 in Nova Gradiška) is a former Croatian football player who played as a striker.

During his professional career that spanned over 15 years between 1989 and 2004, Vlaović played for Croatian clubs Osijek and Dinamo Zagreb before going abroad to play for Calcio Padova from Italy, Valencia from Spain and Panathinaikos from Greece, where he retired in June 2004. At club level, he came to his biggest personal success as he was the top goalscorer of the Croatian First League in 1993 and 1994 while playing for Dinamo Zagreb. His 29 goals scored for Dinamo Zagreb in the 1993-94 season of the Croatian First League are still the highest number of goals scored by an individual player in one season of the league. He also won the Copa del Rey and Supercopa de España with Valencia in 1999.

Vlaović was also a member of the Croatian national team for slightly more than ten years between July 1992 and August 2002 with a total of 51 international caps in which he managed to score 15 goals, being up to this time the Croatian team's second best goalscorer after unreachable Davor Šuker, who scored 30 goals more. He also made one appearance and scored one goal for the Croatian B-side in January 2001. After making only four international appearances in just over three and half years, Vlaović started to play regularly for Croatia in early 1996 and went on to score his first goals for the team with a flawless hat-trick in their 3-0 victory over Korea Republic in a friendly match played in March of that year. He was then also a member of the Croatian team at the Euro 1996 finals in England, appearing in all of the team's four matches and also becoming notable for scoring Croatia's very first goal at a major tournament as he was the scorer of the winning goal in the last five minutes of their opening match against Turkey, where he came off the bench to replace Alen Bokšić in the last 20 minutes. He was also a member of the Croatian squad that surprisingly won the bronze medal at the 1998 FIFA World Cup finals in France and appeared in all of their seven matches at the tournament, although he played all 90 minutes only in the semifinals against France. He scored his only goal at the tournament as he was the scorer of the second goal in the Croatian team's legendary 3-0 victory over Germany in the quarterfinals. The goal scored in the 80th minute was actually the crucial point that practically secured the Croatian team's victory and eliminated the highly favoured Germany from the tournament. Upon returning in the Croatian national team in early 2001 after a year and half of absence, Vlaović made four appearances and scored one goal in the 2002 FIFA World Cup qualifying and was then also a member of the Croatian squad at the final tournament, but spent all of their three group matches on the bench. He subsequently played in only one match for the national team.