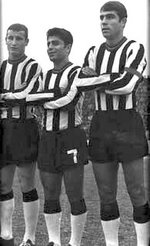 Known to most only by his first name, Leandros Symeonidis was a star forward (outside-left) of PAOK during the 1950s - early 1960s. He was born in 1937 at Kilkis. His nickname was the Black Arrow.

He started playing with PAOK's youth team at the age of 13. Three years later he joins PAOK's third team which consisted primarily of teens. One year later he advanced to PAOK's first team along with team players Giannelos and Havanidis. His first game for the first team of PAOK was a friendly game against the Army National team (Εθνική Ενόπλων. He scored two goals in that game and PAOK won 4-0. His first official championship game was against Apollon Athens where he scored his first goal for PAOK in a championship game. In 1955-56 he is called to play with the Under 21 National team.