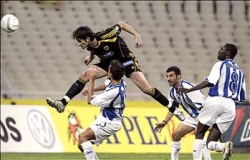 Lyberopoulos scores a goal against Iraklis in the 2005-06 season 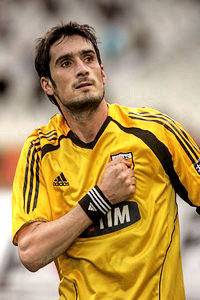 Nikolaos Lyberopoulos is a Greek football player born on the 4th of September, 1975 in Filiatra, near Kalamata. He is a striker who currently belongs to AEK. Previously, he played for Erani Filiatron FC, Kalamata FC, Panathinaikos, AEK Athens and Eintracht Frankfurt. He is perhaps the most popular football player to come from the Peloponnesus.

He has played 76 matches for Greece. In those games he has scored 13 goals, his most memorable being the one against Kazakhstan, winning the match for Greece in the last seconds of additional time. Lyberopoulos repeated this achievement against Moldova, scoring in the 4th minute of injury time to give Greece a 2-1 victory.

When playing for Panathinaikos he reached the semifinal leg of the UEFA Champions League, playing at extremely good level. Italian clubs, mainly Juventus and Hellas Verona showed interest in acquiring him, but his love to the green trefoil made him stay in Athens.

In 2002 he entered into conflict with Panathinaikos' bosses, due to his demand for a well-paid contract extension, and left the club. He had offers from arch rivals Olympiakos, Olympique Marseille and RC Lens from France but finally chose AEK Athens where he was the main weapon of the black and yellow team and also the first offensive choice as well as the team captain. Lyberopoulos can play as center forward, right wing and attacking midfielder, and his most recognized gifts are his accurate shot, his speed and his talent in one-to-one situations where he hardly ever misses.

On July 7, 2008, AEK released Lyberopoulos even though his contract extended through summer of 2009. It was a mutual decision after Lyberopoulos had expressed his desire to leave AEK and Greek football. On July 13, 2008, Eintracht Frankfurt signed Liberopoulos to a two-year contract on a free transfer. In June 2010, Lyberopoulos returned to AEK.