Difference between revisions of "Olympiakos FC"

Olympiakos F.C. was founded in 1925, when the members of "Piraeus Football Club" and of "Piraeus Fans Club" decided, during a historical assembly, the dissolution of the two clubs and the foundation of a new one. Notis Kamberos announced the name OLYMPIAKOS and Michalis Manouskos completed it to OLYMPIAKOS FAN CLUB OF PIRAEUS. 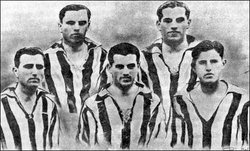