Difference between revisions of "PAOK FC"

PAOK was founded in April 1926 by noble Constantinopolitians who arrived as immigrants in Thessaloniki, after the exchange of population between Greece and Turkey, according to the Lausanne treaty of 1924. These people were: L. Nikolaidis, K. Komitsopoulos, D. Mitsionis, the Dimitriadis brothers, the MP Koultatsoglou, Kouemtzopoulos, Karamaounas and a few more. The constitution of PAOK, with index number 822, was legitimated by the City Court of Thessaloniki on April 28, 1926.

The first President of PAOK was Christos Triantafyllou. The initial idea was to name the team AEK of Thessaloniki. However, this did not happen because this name had already been given to another club in Athens. Consequently, they decided to name the new club as Panthessalonikean Athletic Union of Konstantinoupolitans (P.A.O.K). The historic two-headed Eagle of the Byzantine Empire, symbol of glory and sovereignty was established as the emblem of PAOK. The colors of the team were black and white, in order to symbolize the end of the sorrow and the unknown future of immigration.

The first section to be founded was soccer. Later on, in 1928, other sections were also founded such as basketball, volleyball, athletics, swimming, water polo, boxing and cycling. The soccer team was put in the second division of the local championship of Thessaloniki. The following year, it was promoted to the first division, after beating Iraklis 1-0, which was the champion of Thessaloniki. From this point on, the football team was considered one of the most historical Greek teams with a great and fanatical crowd all over Greece and beyond. The first stadium was built in the area of the University of Thessaloniki. In 1957, the second stadium was built in the neighborhood of Constantinopolitian immigrants, called Toumba (Toumba, meaning tomb), which in recent years has become the home stadium. 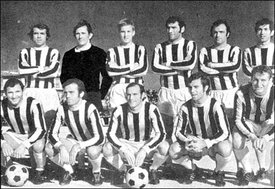