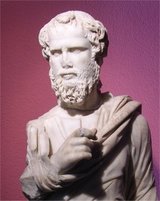 Statue of a sophist

Lucius Flavius Philostratus was born ca.170 CE on the Greek island of Limnos. He became one of the leading sophists or orators of his day, spent some years at the Roman imperial court, and publicized several books, among which are a very entertaining Life of the sophists and an intriguing biography of the charismatic miracle worker Apollonius of Tyana.

Philostratus died between 244 and 249. His father, his son-in-law and his grandson (all namesakes) were also well known authors.