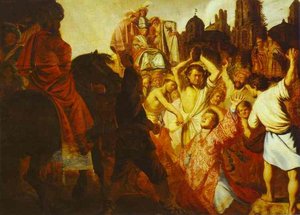 The Martyrdom of St. Stephen by Rembrandt.

Saint Stephen is the Protomartyr or first martyr of Christianity and is venerated as a saint of the Roman Catholic Church and its Eastern Rite, the Eastern Orthodox Church and the Church of England among other religious denominations. He is identified as one of the first deacons chosen by the early church in Acts of the Apostles. The Feast of Saint Stephen is celebrated December 27 in the Eastern Church and on December 26 in the Western Church.

After the ascension of Jesus, the early Church started growing steadily. Its members included native, Middle Eastern Jews as well as Greek-speaking hellenised Jews. When the latter complained, claiming that their needy were being overlooked, the Apostles appointed seven men "full of the Holy Spirit and wisdom" to look after such matters. Stephen is the first one mentioned of the seven. Stephen began to work hard to spread what was then called The Way. He preached the teachings of Jesus and participated in the conversion of Jews and Gentiles. He is credited with performing miracles and successfully debating with those that challenged the Gospel. Acts tells the story of how Stephen was tried by the Sanhedrin for blasphemy and was then stoned to death by an infuriated mob encouraged by Saul of Tarsus, the future Saint Paul [1].

Saint Stephen's name is simply derived from the Greek Stephanos, meaning "crown", which translated into Aramaic as Kelil. Saint Stephen is traditionally invested with a crown of martyrdom for Christianity and is often depicted in art with three stones and the martyrs' palm. In Eastern Christian iconography he is shown as a young beardless man with a tonsure, wearing deacon's vestments, and often holding a miniature church building and censer.

Many churches are named in honor of Saint Stephen but there was no official "Tomb of St Stephen" for centuries until 415, when Christian pilgrims were traveling in large numbers to Jerusalem and a certain priest named Lucian said he had learned by revelation that tomb was in Caphar Gamala, some distance to the north of Jerusalem. Gregory of Tours reports that the intercession of Stephen preserved an oratory dedicated to him at Metz, in which his relics were preserved, when the Huns burned the entire city, leaving only the oratory standing, Easter eve, 451. (Historia Francorum ii.6).