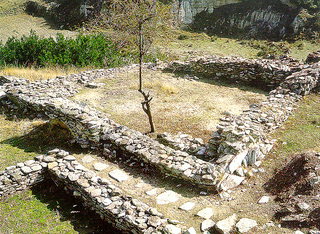 Photo of the discovery

Sesklo, rarely Sesclo (Greek: Σέσκλο) was a village nearby the city of Volos, in Thessaly (central Greece), in the prefecture of Magnesia.The neolithic settlement was discovered in the end of 19th century.

An extended settlement of the Middle Neolithic period

This settlement gives name to the first Neolithic culture of Europe, extending by all Thessalia and parts of Greek Macedonia. The first settlements, that predate the 6th millennium BCE, are known as proto-Sesklo (main group) and pre-Sesklo (secondary groups with differentiated characteristics) and they show an advanced agriculture and a very early use of pottery that rivals in age with those of the Near East. Some affinities with the culture of Hacilar, seem to point to an Asian origin of these first European peasants.

The peoples of Sesklo built their villages at hillsides, near fertile valleys, where they grew wheat and barley, keeping also herds of mainly sheep and goats, though they also had cows, pigs and dogs. Their houses were small, with one or two rooms, built of wood or mudbrick in the early period. Later the construction technique becomes more homogeneous and all homes are built of adobe with stone foundations. In the 6th millennium are found the first houses with two levels and there's also a clear intentional urbanism.

The lower levels of proto-Sesklo lack of pottery, but they soon developed a very fine glazed one (cups and bowls), that they decorate with geometric paintings in red or brown colours. In the Sesklo period properly, new types of ware are incorporated. At the end of the period the decoration evolves to flame motifs.

One significant characteristic of this culture is the abundance of statuettes of women, often pregnant, what some consider to be a religious trait. Whichever the case, these abundant sculptures are present in all the Balcanic and most of the Danubian Neolithic complex form many millennia, though they can't be considered exclusive of this area.

The culture of Seklo is crucial in the expansion of Neolithic into Europe. All other Balcanic cultures (basically those of Karanovo I-II and Starcevo-Köros) originate here, and will be these which will stimulate the birth of the important Danubian Neolithic current. Also, it is thought that the differentiated settlements of pre-Sesklo can be, at least partly, at the origin of the Mediterranean Neolithic (Cardium Pottery|Cardium pottery). So it can be said that, with very few exceptions, all European Neolithic originates here: in the Thessalia of Sesklo.

This culture lasted more than one full millennium, until the arrival, c. 5000 BCE, of a second wave of peoples carrying a different culture (Dimini) brought end to it, apparently through violent conquest.

Sesklo has a small school, a church, a small post office, and a small square (plateia).