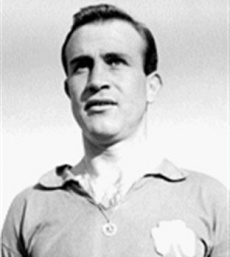 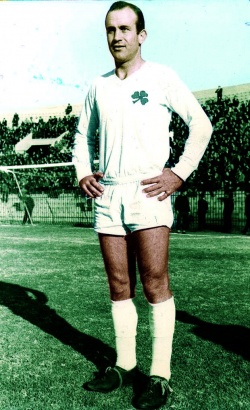 Neotakis "Takis" Loukanidis was a Greek footballer of the 1960s era.

Loukanidis was born in Paranesti, a village in the broader area of Drama on September 25 1937. He played for AEK Komotini before being recruited by Doxa Drama along with his brother Thanasis. Doxa Drama was probably the best regional team in Greece at that time. At the end of the 50s - beginning of 60s, Doxa Drama had coincidentally recruited some of the greatest talents of that era.

The transfer to Panathinaikos

One of the longest lasting transfer serials in the history of Greek football was Panathinaikos' acquisition of Takis Loukanidis from Doxa. He was claimed by all Greek football teams, some Italian teams, by Fenerbahce and also by some Cypriot teams. Finally, Antonis Mantzevelakis brought him to Panathinaikos, via the Cypriot APOEL, at a time when AEK thought they had a done deal with him.

Takis Loukanidis made his debut on the 28th of March, 1962 in the game against ΑΕΚ (score: 3-2 in favour of PAO), while in the following game he scored his first goal with PAO. It was on April 1 and PAO beat Proodeftiki 5-0. In the next few years, alongside Mimis Domazos, he would be part of the most feared midfield in Greece.

Loukanidis sat out most of the 1967 season due to the dispute of six Panathinaikos players with their coach, Stjepan Bobek. He returned later in the year.

Takis Loukanidis ended his career with Aris Thessaloniki. He was capped 23 times by the National Football Team of Greece, scoring 3 goals.