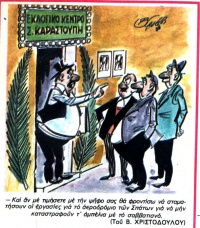 In the next fifty-plus years, he developed himself into the most productive cartoonist in Greece with some 120,000 sketches to his credit.

Christodoulou drew his humourous themes from athletics, politics and every-day life. He was published in newspapers such as Athinaiki, Vradyni, Mesimvrini and such popular magazines as Romantso, Thisavros, Pantheon and Proto.

Newspapers would often publish his political sketches on their front page. Even the 7-year rule of the junta could not prevent Christodoulou from expressing his satyrical views of political life in Greece: After the referendum of 1973 to abolish the monarchy, he published a sketch expressing strong doubts as to the authenticity of the official results.

His comical series "The party of the Barrel-ists" («Κόμμα των Βαρελοφρόνων») poked fun both at the political world and the world of the drunks.