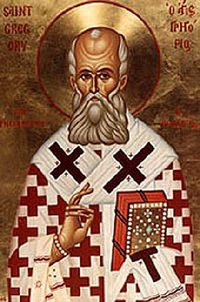 Saint Gregory Nazianzenus (alternative last name spelling: Nazianzenos, Greek Γρηγόριος Ναζιανζηνός) (AD 329 - January 25, 389), also known as Saint Gregory the Theologian, was a 4th century Patriarch of Constantinople. He was the son of Gregory and Nonna. He is honored as a saint by the Catholic Church and a highly-regarded saint in Eastern Orthodoxy.

He first studied at home with his uncle Saint Amphylokhios. Later he studied in Nazianzos (where his father Gregory was bishop), Caesarea of Cappadocia, Alexandria, and Athens. While at Athens, he developed a close friendship with Saint Basil of Caesarea, and also made the acquaintance of Julian, the future Emperor who would become known as Julian the Apostate. Upon finishing his education, he also taught rhetoric in Athens for a short time.

In 361, Gregory returned to Nazianzos and was ordained a presbyter (elder or priest). He spent some time in the wilderness with Basil practicing asceticism, but later returned to care for the Christian parishes in Nazianzos. Basil later made him Bishop of Sasima. In 378, the Antioch Council asked Gregory to come to Constantinople as bishop, as the preceding bishop had recently died. With the consent of Basil, he agreed. At the time, there were many Arians and Apollinarians in the city, both of which heresies were soon to be denounced in 381 at the second Ecumenical Council. But in 379, the night before Easter, a mob of armed heretics burst into Gregory's church during worship services, wounding Gregory and killing another bishop.

In his theology, Gregory advocated the doctrine of the Trinity, including the full divinity of both Jesus and the Holy Spirit. He emphasized that Jesus did not cease to be God when he became a man, nor did he lose any of his divine attributes when he took on human nature. Furthermore, Gregory asserted that Christ was fully human, including a full human soul. He also proclaimed the eternality of the Holy Spirit, saying that the Holy Spirit's actions were somewhat hidden in the Old Testament but much clearer since the ascension of Jesus into Heaven and the descent of the Holy Spirit at the feast of Pentecost. Gregory Nazianzus is given the title 'Gregory the Theologian' by Eastern Orthodoxy, a title he shares with John the Apostle, also known as John the Theologian. He is widely quoted by Eastern Orthodox theologians and highly regarded as a defender of the Christian faith.