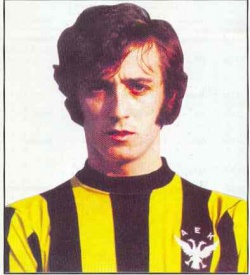 Stefanos Theodoridis was a Greek football defender of the 1970s era.

Theodoridis was born in 1950 and is considered one of the top defenders in the history of AEK with whom he played from 1970 until 1979, having a part in three Alpha Ethniki championship seasons. Late in the 1979 season, he transferred to Olympiakos with whom he closed out his career.

Theodoridis was capped once by the National Football Team of Greece.