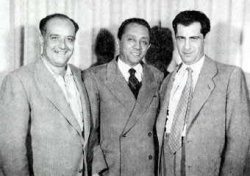 Alekos Sakellarios (1913-1992) was a Greek playwright and screen director.

Sakellarios was born in Athens in 1913. He studied law, worked in journalism and specialised in feature articles and humorous pieces with great success. He gradually turned to the theatre, where he established himself as one of the leading comedy writers, writing over one hundred plays, the majority of which in collaboration with Christos Yiannakopoulos.