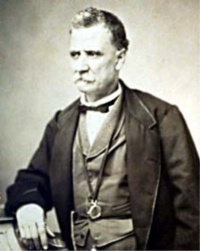 Alexandros Koumoundouros (1817 - February 26 1883) was a political personality famous for his work towards national progress, his patriotism and unselfishness, despite his having been in office during a very unsettled period of Greek history.

Koumoundouros was born in a part of Messinian Mani called “Zarnata” (part of Stavropigio), the son of Spiridonas-Galanis Koumoundouros who was the Bey of the area during the last period of the Turkish administration.

His long career encompassed many facets of political life: legislation, parliamentarianism, the promotion of a democratic regime, the organisation of the army, the distribution of national farms to landless farmers, the approval of major construction work (such as the Isthmus of Corinth), etc…

During his 50-year-long period of political involvement he tried to remain neutral, and to avoid confrontation both with the three Great Powers and with the smaller powers of that time. In this period he held various ministerial appointments eighteen times, was twice president of the Greek Parliament and an outstanding ten times Prime Minister of Greece. Despite many times experiencing inimical conditions, including at least three assassination attempts, he still managed to create a firm foundation for the future positive recognition of Greece at an international level.

After independence, he moved to Nafplion where he went to school, then to Athens to study Law.

In 1841, he took part in the revolution in Crete despite believing it was a lost cause-the conditions were not right for such an undertaking at that time. After the end of the revolution he married Ekaterini Mavromichali and his first son (Konstantinos, 1846) and daughter (Maria) were born. Ekaterìni died young and Koumoundouros married Efthimia Peroti who presented him with his second son in 1858 (Spiridonas).

Meanwhile he was appointed as Public Prosecutor in the Tribunal of Kalamata, but he soon quit this position in order to become a politician. His first political distinction emerged in 1853 when he was elected deputy of the prefecture of Messinia (the greater area of Kalamata). Two years later he became President of the Greek Parliament, and the following year Minister of Economics.

He kept the same ministry in the new governments of 1857 and 1859. After the overthrow of King Otto in 1862 he became Minister of Justice of the provisional government.

The first elections for a proper government after the fall of Otto took place in 1863 and Koumoundouros remained as Minister of Justice, however, instability led to new elections the following year.

March 31st 1881 was the time of Koumoundouros’ greatest achievement, when – during his last (tenth) term as premier - after diplomatic negotiations with Turkey, he managed to bring about the annexation of areas Thessaly and Arta on the Greek mainland.

Afterwards, he called for new elections so that representatives of the newly-annexed regions could enter parliament. Despite his achievement, the opposition party candidate was elected President of Parliament. As a result, Koumoundouros resigned on March 3rd 1882. He died some months later on February 26th 1883, in his home on Koumoundouros Square (in Athens) and was buried at public expense in the First Cemetery of Athens.