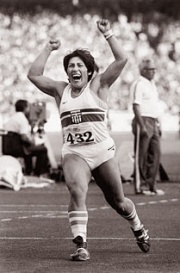 Verouli tested positive for nandrolone at the 1984 Summer Olympics and was banned from the competition.

Verouli won a total of 118 gold medals for victories in various competitions.

She retired from athletics in 1993 and has since, entered local politics, amongst others serving on the City Council of Athens suburb Iraklio.

She was married from 1984 to 1988 to weightlifter Ioannis Tsintsaris.

The city of Kavala honoured Verouli by naming the second largest stadium after her. The pitch is also known as “Veroulio”.