Difference between revisions of "Archbishop Damaskinos" 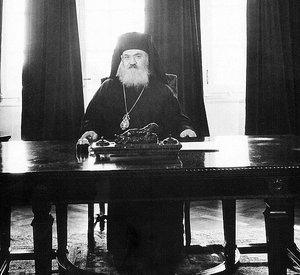 Archbishop Damaskinos (Papandreou) (March 3, 1891-May 20, 1949) was the archbishop of Athens and all Greece from 1941 until his death. He was also the regent of Greece between the pull-out of the German occupation force in 1944 and the return of King George II to Greece in 1946. His rule marked the reconstruction of Greece after German occupation during World War II and the unrest spanning the beginning of the shooting phase of the Greek Civil War.

He was born Dimitrios Papandreou in Dorvitsa, Aitoloakarnania prefecture, Greece (no relationship to politician Georgios Papandreou). He enlisted in the Greek army during the Balkan Wars. He was ordained a priest of the Greek Orthodox Church in 1917. In 1922, he was made bishop of Corinth. He spend the early 1930s as an ambassador of the Ecumenical Patriarch in the United States, where he labored to help organize the Greek Orthodox Archdiocese of America.

In 1938 he was elected archbishop of Athens, taking the name Damaskinos. Ioannis Metaxas, dictator of Greece at the time, objected to Damaskinos and forced the cancellation of his election, and the appointment of Metropolitan Chrysanthos to the post. After the 1941 German invasion of Greece and the fall of the Greek government, the Metropolitans who had elected Damaskinos seized the opportunity to eject Chrisanthos from the throne (with German agreement, as the latter had refused to be present at the oath-taking ceremony of the quisling Prime Minister Georgios Tsolakoglou), and Damaskinos was reinstalled. 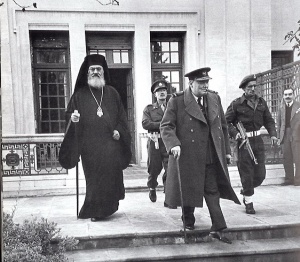 The Archbishop of Athens was the spiritual leader of the Greek Orthodox people of Athens, and Damaskinos worked very hard to live up to his position during those hard times. He frequently clashed with the German authorities and the quisling government. In 1943, the Germans began the persecution of the Greek Jews, and their deportations to concentration camps. Damaskinos formally protested the actions of the occupational authorities, even at the threat of execution by the local SS commander. The churches under his jurisdiction were also ordered quietly by Damaskinos to distribute baptismal certificates to Jews fleeing the Nazis, saving thousands of Romaniote Jews in and around Athens.

Once, in public, he was theatened by the German commander of Athens with execution by firing squad. His famous response was "Greek religious leaders are not shot, they are hanged. I request that you respect this custom".

After the occupation ended, Damaskinos was proclaimed regent of Greece until the return of the king from exile. During this time, fighting broke out between pro-royalist Greek soldiers and communist partisans. He took control of the situation in his early term, appointing himself Prime Minister during late 1945. Though he wielded little power in his latter term, Damaskinos continued to call for peace and order in the country. He relinquished his position after fighting began to die down and recalled the king formally on September 28, 1946. He died in Athens in 1949.