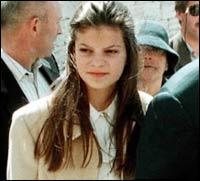 Athina Roussel Onassis at age of 18

Athina Onassis Roussel (born January 29, 1985) is the granddaughter of the late Greek shipping magnate Aristotle Onassis. Her mother Christina Onassis died prematurely in 1988 from a pulmonary edema at the age of 37.

After her mother's death, Athina was raised by her French father Thierry Roussel, who later married Gaby Landhage from Sweden. As Athina's step-mother, Gaby provided a stable and protective family environment for Athina in the family's five-bedroom villa in Lussy-sur-Morges, Switzerland.

Athina inherited an estimated US$2.7 billion worth of cash, property, jewels, and other assets from the Onassis estate. Her grandfather and mother, however, had never trusted her father completely, which led the family to arrange for a Board of Administrators to have control over the family money until Athina comes of age. During her childhood and adolescence, all expenses made on her behalf by her father (using money from the Onassis inheritance) had to be approved by the Board in advance (which led her father to threat constantly to move back to Paris, France with the family, where income taxes would cost the estate a "small fortune a year", as he put it). On her 18th birthday, also in accordance with the Onassis will, Athina was granted control over half of her personal fortune. On her 21st birthday, she will gain control over the other half, in addition to becoming the president of the Onassis Foundation, with assets in excess of US$2.1 billion. 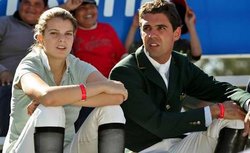 Athina has bought a house in Belgium, near the capital Brussels, where she has several horses. Since she started dating Brazilian professional showjumper Álvaro de Miranda Neto, more commonly known as "Doda" (12 years her senior), in March of 2003, Athina has moved to São Paulo, in Brazil, where the couple lives. They were married on December 4, 2005. Their plans are to stay in São Paulo, which caused Nelson Pessoa, the captain of the Brazilian Equestrian Team, to regret publicly that Doda has forsaken his international career, and call upon Athina's influence on him, to persuade her husband to return to Europe and compete there.