Difference between revisions of "David Stergakos" 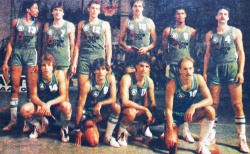 Stergakos was born in New Jersey, USA on October 24, 1956. He came to Greece, joining Panathinaikos, in 1979, winning four league titles and four Greek cups with the greens.

Stergakos played 65 games with the National Basketball Team of Greece, scoring 585 points. He was a member of the squad that won silver in Eurobasket 1989 in Zagreb.

After his playing days were over, Stergakos managed Maroussi BC.