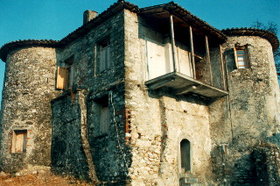 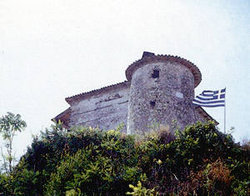 The Tower from a different angle

Drosinis Tower in Gouves, Euboea is built on a rock and dominates the whole region. It is a two-storied edifice of a 100 square meters of area with stone-made one-meter-wide walls. For the region, it is a most significant building of Venetian architecture.

It was built during the first years of the 19th century by its then owner, the Turk Ibrahim-Aga. After 1821, it was sold to Alexander Thesyllas and Baptistis Drosos and in 1831 it was resold to Constantine Petrokokkinos, grandfather of the famous Greek writer, George Drosinis. After that, it passed to the property of the village's priest, Stavros Papaioannou and later on to his offsprings. Today, it belongs to the community of Gouves.

The building started being restored by the community of Gouves (supported financially by the Ministry of Culture), after the 1st Ephorate of Contemporary and Modern Monuments approved the relevant restoration study in 1988.

By a ministerial decree of 1988, the building was identified as a preserved monument and is currently being used as a Folk Art Museum.