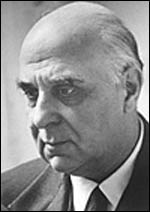 In 1963, Seferis was awarded the Nobel Prize for Literature "for his eminent lyrical writing, inspired by a deep feeling for the Hellenic world of culture." [[1]] Seferis was the first Greek to receive the prize (and the only, until Odysseas Elytis became a Nobel laureate in 1979). His nationality, and the role he had played in the 20th century renaissance of Greek literature and culture, were probably a large contributing factor to the award decision. But in his acceptance speech, Seferis chose to emphasise his own humanist philosophy, concluding: "When on his way to Thebes Oedipus encountered the Sphinx, his answer to its riddle was: 'Man'. That simple word destroyed the monster. We have many monsters to destroy. Let us think of the answer of Oedipus." [[2]] While Seferis has sometimes been considered a nationalist poet, his 'Hellenism' had more to do with his identifying a unifying strand of humanism in the continuity of Greek culture and literature.