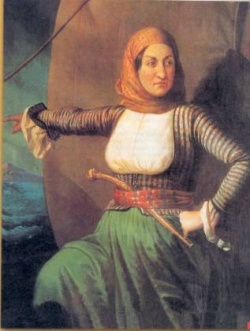 Bouboulina was born in a prison in Constantinople. She was the daughter of captain Stavrianos Pinotsis and his wife Skevo. The Ottomans had imprisoned Pinotsis because he had taken part in the failed Orlov Revolution of 1769-1770 against the Ottoman rule. Her father died soon afterwards and the mother and the child returned to the island of Hydra. Four years later, when her mother married Dimitrios Lazarou-Orlof, they moved to the island of Spetses. Bouboulina had eight half-siblings.

Later in life she married her second husband D. Bouboulis. Bouboulis was killed in a battle against Algerian pirates in 1811. Bouboulina took over his fortune and trading business and built four ships, including one large warship Agamemnon, at her own expense.

In 1816, the Ottomans tried to confiscate Bouboulina's property because her second husband had fought for the Russians against the Turks in the Turko-Russian wars. Bouboulina sailed to Constantinople to meet Russian ambassador Strogonov to seek his protection because of her husband's services to the Russians. Strogonov sent her to safety in Crimea. She also met with the mother of the Sultan who reputedly convinced her son to leave Bouboulina's property alone. After three months of exile in the Crimea, Bouboulina returned to Spetses.

Bouboulina joined the Filiki Etaireia, an underground organization that was preparing for revolution against the Ottoman rule, as its only female member. She bought arms and ammunitions at her own expense and brought them secretly to Spetses in her ships. Construction of the ship Agamemnon was finished 1820. It was later one of the largest warships in the hands of Greek rebels. Bouboulina bribed Turkish officials to ignore the ship's size. She also organized her own armed troops, composed of men from Spetses. She used most of her fortune to provide food and ammunition for the sailors and soldiers under her command.

On March 13, 1821 Bouboulina raised her own Greek flag, based on the flag of the Byzantine emperor Comnenus, on the mast of Agamemnon. On April 3 the people of Spetses revolted and later joined forces with a number of other ships from other Greek islands. Bouboulina sailed with eight ships to Nafplion and began a naval blockade. She led her own troops until the fall of the fort in November 13 1822. Later she took part in the naval blockade and capture of Monemvasia and Pylos. In the battle at Argos Bouboulina's son Yiannis Yiannouzas died in combat against superior numbers of Ottoman troops.

She arrived in time to witness the fall of Tripolis on September 11 1821 and met general Theodoros Kolokotronis. Later their children Eleni Boubouli and Panos Kolokotronis were married. During the ensuing massacre of Turks, Bouboulina saved most of the female members of the sultan's household.

During the war, when the opposing factions erupted into a civil war in 1824, the Greek government arrested Bouboulina because of her family connection to now-imprisoned Kolokotronis; the government also killed her son-in-law. She was eventually exiled back to Spetses. She had used all of her fortune for the war of independence.

Laskarina Bouboulina was killed in 1825 as the result of a family feud in Spetses. The daughter of a Koutsis family had eloped with Bouboulina's son Georgios Yiannouzas. The killer was not identified.

Descendants of Bouboulina gave the ship Agamemnon to the Greek state. It was renamed Spetses and became a Greek navy flagship. It was burned in the naval base of Poros during the next Greek civil war at 1831.

On the island os Spetses there is a museum dedicated to Laskarina called " The Bouboulina Museum". Housed in the 300 year old mansion of Bouboulina, this private museum display a collection of the personal effects and household furnishing of the Spetsiote heroine. At the museum, during a forty-minute tour, you will hear the story of the legendary Bouboulina, from her birth inside the prisons of Constantinople, to her untimely and tragic death. Learn about her actions during the 1821 revolutionary fight for freedom, including her contributions to and sacrifices for her country. This traditional Spetsiote mansion is really interesting to visit for its collection but also for its astonishing wood-carved Florentine ceiling in the main salon.