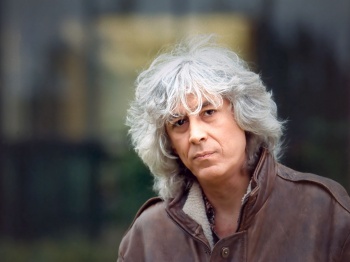 Loukianos (Lucianos) Kilaidonis was born in Kypseli, Athens on July 15, 1943. He studied and finished the a course at the Architecture School of Metsobio Polytechnic School, but never worked as an architect.

In the beginning of the 70s he wrote his first music piece, which iwas for a theatre play by Kostoula Mitropoulou called Our City. The songs in the record released are sung by Vicki Mosholiou and Manolis Mitsias.

From 1978 till 1991 he has released 5 completely personal records: ‘I am a poor and lonely cowboy’, ‘Stay cool guys’, ‘ Low Flight’, ‘Songs For Bad Guys’, ‘Why I Will become A Carpenter’ and a record with songs of the 50’s that Lucianos loved and sings : ‘Fifties and dry Bread’. He also releases a double record with theatrical music titled ‘Lets Go Maestro’.

In 1993 he released a double record titled: ‘OH! My sweet Home country’ which is a chronicle of the musical life of Greece for the last 50 years. This work represented in a record for the first time categories of songs that belonged to the oral tradition. They range from school songs, songs of the neighbourhood, of the street, of camping, of the church school, of the scouts and also of the Ionian Islands and Rebetika.

He also collaborates with the National Theatre, the State Theatre of Northern Greece, the Public Theatre of L. Trivizas, and also the Children’s Theatre Scene by Xenia Kalogeropoulou.

His last recorded work is: ‘New Kipseli – New Orleans’ that came out from his collaboration with the famous band from New Orleans: The Preservation Hall Jazz Band.

From 1995 and until 1999 he developed with his wife Anna Vagena their own Art Venue ‘Metaxourgeio’, in a completely renovated old building, that is located in the centre of Athens. This space is where they represent all there current theatrical and musical creations, and it started working in October 1999 with the presentation of the show ‘Microastica’ by Lucianos Kilaidonis and Giannis Negrepontis.

While he still has concerts in Greece and abroad he mainly presents musical shows in ‘Metaxourgeio’. These include Celebration for the welcoming of 2000, musical show with a title ‘The West meet the East’ with rebetika songs and songs from Smyrna, with the group of Nikos and Jasmine Saragouda, a musical show titled ‘Diamonds in the Mud’ and ‘Happy 1950’ with Greek Jazz of composers from the 40s-50s with the band Take The Money And Run, and other.