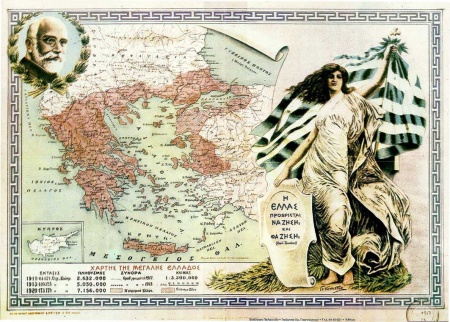 Megali Idea (Μεγάλη Ιδέα) (Greek for "Great Idea") is a concept of Greek nationalism expressing the goal of establishing a Greek state that encompasses all ethnic Greeks.

The Greek state emerging under Ioannis Kapodistrias after the Greek War of Independence left out twice as many ethnic Greeks as it included. The Great Idea encompassed a desire to bring these groups into the Greek state; specifically in the territories of Epirus, Thessaly, Macedonia, Thrace, the Aegean Islands, Crete, Cyprus, parts of Anatolia, and the city of Constantinople, that would replace Athens as the capital.

A major proponent was Eleftherios Venizelos, who expanded Greek territory in the Balkan Wars of 1912-13 — southern Epirus, Crete, and southern Macedonia were attached to Greece. Thessaly, and part of southern Epirus, had been annexed in 1881. Victory in World War I seemed to promise an even greater realisation of the Great Idea, as Greece won Northern Epirus, Smyrna, Imbros and Tenedos and Western Thrace.

A major defeat followed in 1922, however, when the Turkish nationalists defeated and expelled the Greeks from Anatolia during the Greco-Turkish War (1919-1922). Greece lost Smyrna, Imbros and Tenedos to Turkey and was not able to retain Northern Epirus. Greece did retain western Thrace and, in 1945, at the end of World War II, acquired the Dodecanese from Italy.

Although the Great Idea ceased to be a driving force behind Greek foreign policy after the Treaty of Lausanne, remnants remain. Greece only recently, for example, recognised the present Greco-Albanian border (and, implicitly, Albanian rule over northern Epirus); Greece also sponsored a pro-enosis military coup on Cyprus in July 1974 leading to the Turkish Invasion of Cyprus and the de-facto partition of the island of Cyprus into Greek and Turkish sectors.