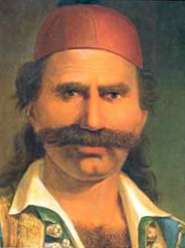 Odysseus Androutsos was a hero of the Greek War of Independence. He was born in Ithaca in 1788, however his family was from the village of Livadates in Phthiotis prefecture. His father was Andreas Androutsos, a klepht.

After losing his father, Androutsos joined the Albanian army of Ali Pasha and became an officer, however, in 1818 he joined the Friendly Society (Filiki Eteria) which was planning the liberation of Greece from the Ottoman Empire.

The War of Independence

In May 1821, Omer Vrioni, the commander of the Turkish army, advanced with 8,000 men, after crushing the resistance of the Greeks at the river of Alamana (Spercheios) and putting Athanasios Diakos to death, heading south into Peloponnesus to crush the Greek uprising. Odysseus Androutsos with a band of 100 or so men took up a defensive position at an inn near Gravia, supported by Panourgias and Diovouniotis and their men. Vrioni attacked the inn but was repulsed with heavy casualties (over 400 dead). Finally, he was forced to ask for reinforcements and artillery but the Greeks managed to slip out before the reinforcements arrived. Androutsos lost two men in the battle and earned the title of commander in chief of the Greek forces in Rumeli (Central Greece).

Androutsos' glory did not last long. In the following year, 1822, he was accused (probably with some justification) of being in contact with the Turks and was stripped of his command. Finally, in 1825, the revolutionary government placed him under arrest in a cave at the Acropolis in Athens. The new commander, Yiannis Gouras, who once was Androutsos' second in command, had him executed on June 5, 1825.

Androutsos was a controversial figure in his life. Yiannis Makriyiannis, in his memoirs on the 1821 War of Independence both defends him (in the beginning) and attacks him (later on). Androutsos had served Ali Pasha and at some point in his life may have espoused Islam. The accusations of the revolutionary government had some merit. However, had Androutsos not impeded Vrioni's progress at Gravia, the success of the war at its early stage would have been endangered.