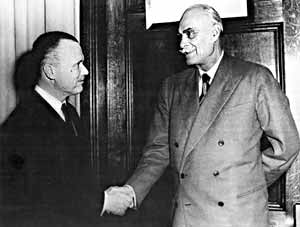 The second-born son of Eleftherios Venizelos, Sophoklis first became a Member of the Hellenic Parliament with his father's Liberal Party in 1920. In 1941, after Greece was occupied by German troops, he became ambassador to the United States, representing the Greek government-in-exile based in Cairo. He became a minister of that government in 1943, and its Prime Minister in 1944.

After the end of the war, he returned to Greece where he became Vice President of the Liberal Party (led by Themistoklis Sofoulis) and a minister in the first post-war government led by Georgios Papandreou. In 1948, he assumed the leadership of the party and became a minister in a number of short-lived liberal governments led by Papandreou and Nikolaos Plastiras; he was also the Prime Minister of two such governments. As Prime Minister, in 1950, he authorised the involvement of a Greek Expeditionary Force in the Korean War.

In 1954, his long time friendship with Georgios Papandreou was shaken, and he formed the rival Liberal Democratic Union party. The rift was bridged in 1957 and in 1961 he became a founding member of the Center Union party, which he served until his sudden death, on board a ferry boat, on February 7, 1964. His grave lies next to his father's on the island of Crete.