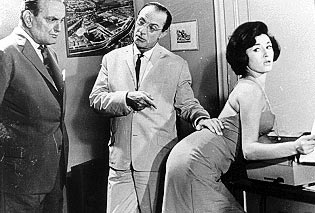 The master's lady (Greek Η κυρία του κυρίου), was a Greek film produced by Finos Film and released in 1962.

Minas Kaloudis is an employee, in a dead end job, incapable of so much as getting a pay rise from his supervisor Theofanis Delakis.

Minas' wife, Eva, struggles to make ends meet and to save money, even for an inexpensive new coat. Her cousin, Angela, advises her to take the initiative as Minas is too laid back to ever amount to much.

The opportunity soon presents itself as Minas' co-worker, Mr Stamatiou, proposes that Eva coax her husband to award a contract to a specific firm in return for a sizable kickback. Eva succeeds, using reverse logic on her honest husband. The couple now move to a posh area and Mr Delakis finally notices Minas and promotes him to an executive position.

Eva's dishonesty is eventually exposed and Minas is disappointed. He wants out of the corrupt world of bribery and kickbacks. To convince her husband, Eva enlists the help of Delakis but ends up slapping him after he makes a pass at her.

At the end, Delakis rescinds the promotion but Minas and Eva discover they are happy with each other and, maybe, a child in the future.