Difference between revisions of "Under-21 National Football Team" 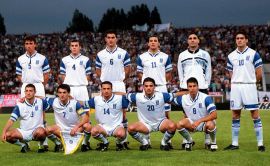 The Under-21 National Football Team of Greece, also known as Greece Under-21s or Greece U-21s (Greek Εθνική Ελπίδων), is the under 21 years of age team of the Greece national football team.

This team is for Greek players aged 21 or under at the start of a two-year European Under-21 Football Championship campaign, so players can be, and often are, up to 23 years old. Also in existence are teams for Under-20s (for non-UEFA tournaments), Under-19s and Under 17s. As long as they are eligible, players can play at any level, making it possible to play for the U-21s, senior side and again for the U-21s, as Sotiris Ninis has done recently. It is also possible to play for one country at youth level and another at senior level (providing the player is eligible).