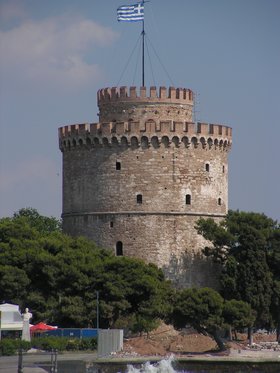 The White Tower of Thessaloniki

The White Tower of Thessaloniki (in Greek, Λευκός Πύργος, Lefkos Pyrgos) is a monument on the waterfront of the city of Thessaloniki, capital of the region of Macedonia in northern Greece. It has been adopted as the symbol of the city, and also as a symbol of Greek sovereignty over Macedonia.

The present tower dates from the reign of the Ottoman Sultan Suleiman the Magnificent (1520-66). There was an older tower on the same site, probably built by French knights during the period of the Latin Empire in Constantinople. The Tower was used by the Ottomans successively as a fort, garrison and a prison. In 1826, at the order of the Sultan Mahmud II, there was a massacre of the prisoners in the Tower, and it acquired the name "the Bloody Tower."

The Tower was for centuries part of the walls of the old city of Thessaloniki (known as Salonik in Ottoman times), but these were demolished in 1866. When Thessaloniki was captured by the Greeks during the Balkan War of 1912, the tower was whitewashed as a symbolic gesture of cleansing, and acquired its present name. King George I of Greece was assassinated not far from the White Tower in March 1913.

The Tower is now a buff colour but has retained the name White Tower. It now stands on Thessaloniki's waterfront boulevard, Nikis (Victory) Street. It houses a Byzantine museum and is one of the city's leading tourist attractions. The Tower is under the administation of the Ephorate of Byzantine Antiquities of the Greek Ministry of Culture.

After the independence of the Former Yugoslav Republic of Macedonia (FYROM) in 1991, the White Tower became a symbol of the dispute between Greece and FYROM over the name "Macedonia" and the symbols of Macedonian history (see also Vergina). Greeks alleged that FYROM was using the White Tower on its coat of arms and its new banknotes, allegedly implying a territorial claim over Thessaloniki. In fact, the "banknotes" had been printed by a private company, not by the FYROM government. The official coat of arms of FYROM has never included the White Tower.

It is true that FYROM nationalist groups have advanced territorial claims over what they call "Aegean Macedonia," and that these groups use the White Tower as a symbol of their claims that Thessaloniki (which they call Solun) ought to be part of a greater Republic of Macedonia. Since the 1995 agreement between Greece and FYROM, however, it does not appear that the government of the Former Yugoslav Republic of Macedonia has given these groups official encouragement.

that supporters of PAOK gather at this place to celebrate after a trophy is won?