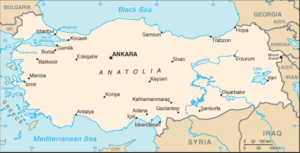 Anatolia (Greek: ανατολή anatolē or anatolí, "rising of the sun" or "East"; compare "Orient" and "Levant", by popular etymology Turkish associated with Anadolu to ana "mother" and dolu "filled"), also called by the Latin name of Asia Minor, is a region of Southwest Asia which corresponds today to the Asian portion of Turkey.

Asia Minor (Anatolia) describes the peninsula, on the West side of Asia, that starts at an imaginary line from the Gulf of Alexandretta until Trabzon on the Black Sea. It is surrounded by the Black Sea on the North, the Aegean Sea on the West and the Mediterranean on the South. On the Western side it nearly touches the continent of Europe from which it is separated by the Bosporus, the Sea of Marmara (Propontis) and the Dardanelles (Hellespont).

Because of its strategic location at the intersection of Asia and Europe, Anatolia has been a cradle for several civilizations since prehistoric ages.

Greeks first settled in the southwest part of Anatolia around the time of the Doric invasion of mainland Greece (1100 BC). They were followed, from the 9th until the 6th Century BC, by waves of Ionians, Aeolians and Dorians who colonised the western coast building important cities and establishing a civilisation equal, if not better than, that of mainland Greece. The Greek cities, along with the rest of Asia Minor, were subjugated by the Persians under Cyrus the Great. They were liberated by Alexander the Great and, after his death, became part of the Seleucid Kingdom. Following four centuries of Roman rule, Asia Minor became part of the Byzantine Empire. Persians, Arabs, Seljuk and Ottoman Turks tried to conquer Asia Minor and finally the latter managed to accomplish it over several centuries. The Greek presence remained however, until 1922 (see Asia Minor disaster).

Today, the inhabitants of Anatolia are mostly native speakers of the Turkish language, which was introduced with the conquest of Anatolia by Turkic peoples and the rise of the Ottoman Empire in the 13th century. However, Anatolia remained multi-ethnic until the early 20th century. A significant Kurdish ethnic and linguistic minority still exists in the south eastern regions.