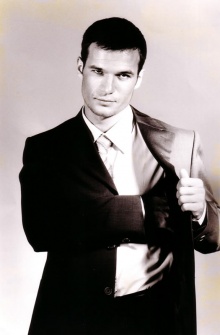 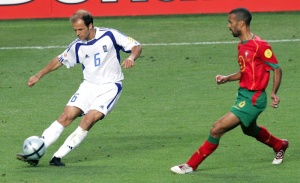 In Euro 2004 game against Portugal

A member of the victorious UEFA EURO 2004 squad, Angelos Basinas (born January 3, 1976) spent ten years at the Apostolos Nikolaidis Stadium following his debut with Panathinaikos FC in 1995. He subsequently registered 27 goals in 199 league appearances, winning two championships and one Greek Cup with Panathinaikos.

Basinas participated in the opening ceremonies of the 2004 Olympiad being one of six sports personalities that carried the Olympic Games flag into the stadium.

He was released from Panathinaikos on 21 September, 2005.

On January 20 2006, Basinas reached a contract agreement with Spanish strugglers RCD Mallorca, for the next season and a half - Basinas' first foray into international waters.

On July 31, 2008, Basinas joined AEK on a three year contract, however, he was released in January 2009 and signed for Portsmouth in England.

Basinas played only 17 games for Portsmouth. In the summer of 2010, he joined Arles in France. He was released after two months and four games.

Basinas was part of Greece's winning Euro 2004 National Football Team scoring a goal in the tournament's opening game. He skippered Greece at Euro 2008.

Over all, he earned 100 caps for his country - the second Greek to do so after Theo Zagorakis. He scored 7 goals as an international for Greece.