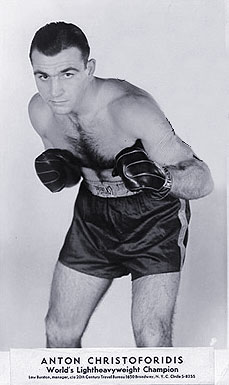 Christoforidis was born on May 26, 1918 in Messinia prefecture, Greece. His first bout was against Francisco Garcia Lluch in Paris, France which he won by decision. He made his US debut on January 5, 1940 in Madison Square Garden defeating Willie Pavlovich. At that point Christoforidis settled in Geneva, Ohio.

Christoforidis was a very competent boxer who possessed good skills and got the most out of his ability. Since he did not possess heavy hands, having only recorded eleven knockouts in sixty-five fights, he relied on ring savvy and work-rate to get the job done.

He won the National Boxing Association world light heavyweight title on January 13, 1941 in Cleveland, Ohio by defeating Melio Bettina in a unanimous decision of a 15-round bout. Christoforidis defended his title successfully twice against Italo Colonnelo in Baltimore, Maryland and Johnny Romero in St Louis. He lost it May 22, 1941 to Gus Lesnevich by unanimous decision.

Christoforidis died on October 31, 1985 at the age of 67. He has made history in his homeland and would be remembered by millions of his countrymen for decades to come.