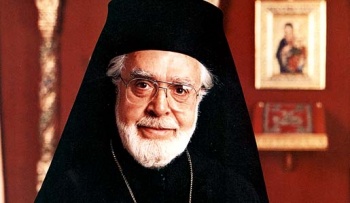 Dean of all religious leaders in the United States when he retired at the age of 85, Archbishop Iakovos’ 37 years of service were distinguished by his leadership in furthering religious unity, revitalizing Christian worship and championing human and civil rights.

Known throughout the world as a crusader in the modern ecumenical movement for Christian Unity, Archbishop Iakovos served for nine years as president of the World Council of Churches, established dialogues with Roman Catholics, Anglicans, Lutherans, Southern Baptists and Black Church leaders, initiated Orthodox Dialogue with Judaism and was the first Greek Orthodox Bishop to visit a Roman Catholic Pontiff in more than four centuries when Pope John XXIII received him at the Vatican in 1959. In a successful effort to promote closer ties among Orthodox jurisdictions, he founded the Standing Conference of Canonical Orthodox Bishops in the Americas (SCOBA) in 1960.

“Ecumenism,” His Eminence said, “is the hope for international understanding, for humanitarian allegiance, for true peace based on justice and dignity, and for God’s continued presence and involvement in modern history.”

A champion of civil and human rights, he was captured on the cover of Life magazine on March 26,1965, walking hand in hand with Dr. Martin Luther King, Jr. in Selma, AL, eyes fixed on the dream of equality for all Americans. He vigorously supported the passage of the 1964 Civil Rights legislation exclaiming when the first bill was passed,

"Glory to the Most High! May this mark the beginning of a new age for all humankind, an era when the Word of God charts and guides our lives”.

In the international arena he spoke out forcefully against the violation of human rights and religious freedom and, in 1974, initiated a massive campaign to assist Greek Cypriot refugees following the invasion of Cyprus by Turkish armed forces. He opposed the war in Vietnam, while supporting the right of Israelis for peace and secure boundaries, as well as the rights of the Palestinians for a just and humane resolution of their claims.

Friend to nine presidents, and religious and political leaders worldwide, Archbishop Iakovos was the recipient of honorary degrees from some 40 colleges and universities, including Bates College and Harvard University, he was cited in 1979 by both Houses of Congress and paid official tribute in the Congressional Record. On June 6, 2001, he was honored by Harvard Divinity School as Alumnae Day recipient of the Rabbi Martin Katzenstein Award, established in 1979 to recognize a Divinity School graduate who exhibits “a passionate and helpful interest in the lives of other people, an informed and realistic faithfulness, an embodiment of the idea that love is not so much a feeling as a way of acting, and a reliable sense of humor.”

He was the recipient of the Presidential Medal of Freedom, the Nation’s highest civilian honor, bestowed by President Jimmy Carter on June 9,1980, in 1986 he was awarded the Ellis Island Medal of Honor and was cited by the Academy of Athens, the National Conference of Christians and Jews and the Appeal of Conscience, among others.

A United States citizen since 1950, Archbishop Iakovos was an admirable role model for American Greek Orthodox Christians; thoroughly committed to the vital democracy of his adopted country without forfeiting the ageless values of Greek culture or abandoning Greek Orthodoxy’s spiritual and ecclesiastical roots in the Church of Constantinople. Commenting on Orthodoxy in America, he said: “ Our Church without ceasing to be ethnically rooted in Greece and religiously in the Ecumenical Patriarchate, must believe that America is the place where God intended it to grow…and that it has an obligation, without compromising in matters of faith, to adapt itself to the existing conditions.”

Born on the Island of Imvros, Turkey on July 29,1911 to Maria and Athanasios Koukouzis, he had two sisters Virginia and Chrysanthi and a brother Panagiotis. He enrolled at age 15 in the Ecumenical Patriarchal Theological School at Halki. After graduating with high honors, Demetrios Koukouzis was ordained Deacon in 1934, taking the ecclesiastical name Iakovos. Five years after his ordination, Deacon Iakovos received an invitation to serve as Archdeacon to the late Archbishop Athenagoras, the Primate of North and South America, who later (1949-72) became Ecumenical Patriarch of Constantinople.

Ordained to the priesthood in 1940 in Lowell, MA, he served at St. George Church, Hartford, CT, while teaching and serving as assistant dean of the Holy Cross Greek Orthodox Theological School, then in Pomfret, CT and now in Brookline, MA. In 1941, he was named Preacher at Holy Trinity Cathedral in New York City and in the summer of 1942 served as temporary Dean of St. Nicholas Church in St. Louis, MO. He was appointed Dean of the Annunciation Greek Orthodox Cathedral in Boston in 1942 and remained there until 1954. In 1945 he earned a Master of Sacred Theology Degree from Harvard University.

In 1954, he was ordained Bishop of Melita, by his spiritual father and mentor, Ecumenical Patriarch Athenagoras, for whom he served four years as personal representative of the Patriarchate to the World Council of Churches in Geneva, during which time he was elevated to the rank of Metropolitan. On February 14, 1959, the Holy Synod of the Ecumenical Patriarchate elected Metropolitan Iakovos as successor to Archbishop Michael, who died July 15, 1958, as Primate of the Greek Orthodox Church in the Americas. He was enthroned April 1, 1959 at Holy Trinity Cathedral, assuming responsibility for what has grown to over 500 parishes in the United States.

Archbishop Iakovos improved parish organizations, upgraded roles of the Archdiocesan Council, the Biennial Clergy-Laity Congress, the Ladies Philoptochos Society and the Orthodox Observer; introduced new Archdiocesan departments including Church and Society, Youth Ministry and encouraged the expansion of St. Michael’s Home for Aged and Saint Basil Academy. He founded a Major Gifts program for the Archdiocese, today entitled the Archbishop Iakovos Leadership 100 Endowment Fund, which asks Greek Orthodox faithful to commit themselves to offer $100,000 to the Church over a ten-year period to maintain life sustaining ministries of the Church.

As a former faculty member and later Dean of Holy Cross School of Theology, His Eminence had a special appreciation for learning, both within the family and parish and also at the level of higher education for Greek Orthodox youth and seminarians. The Archbishop guided the reorganization of Holy Cross into an institution fully accredited by the Association of Theological Schools in America. He conceived and brought to fruition Hellenic College, an undergraduate school which functions in connection with Holy Cross.

Most importantly, even in retirement, Archbishop Iakovos remained a committed and caring pastor to a whole generation of Greek Americans whose hard work, determination and pride in their religious and cultural heritage he embodied.

As it has been recently announced, the School of Pastoral Theology of the Aristotle University of Thessaloniki in co-operation with the Institute for National and Religious Studies which is based in Thessaloniki, will publish a two-volume book which will contain the inedited correspondence of Archbishop Iakovos with Presidents of the United States of America and other famous personalities from U.S.A., Greece and abroad. The correspondence, which includes various information about the national issues of Greece, from 1959 to 1996, will be a publication event of big importance.