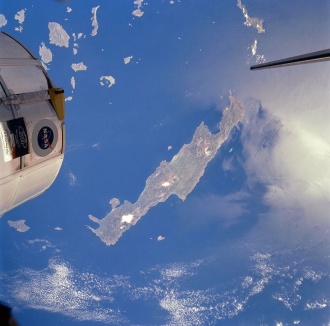 Aerial view of the Island of Crete

The largest island in Greece and the fifth largest island in the Mediterranean, Crete is 243 kilometers long and varies in width from twelve to fifty-six kilometers. It is located about seventyfive kilometers southeast of the easternmost peninsula of the Peloponnesus. The island's topography is dominated by rugged mountains that rise from the sea to form a rocky southern coastline. The slope downward to the northern coast is more moderate, forming a coastal plain and several natural harbors. The highest point is Mt. Ida (Idi), 2,456 meters high, roughly in the center of the island. The central east-west spine of mountains breaks into four segments; the major flatland is the Mesara Plain in the south-central region. That region and several upland basins provide agricultural land that has seasonal flooding. Crete has six rivers, whose flow varies greatly according to the season, and there is one fresh-water lake.

The center of the ancient Minoan civilization and the scene of many episodes of Greek mythology, Crete was settled in about 6300 B.C. (see Earliest History , ch. 1). Although the Minoan civilization ended about 1200 B.C., Crete's location in the eastern Mediterranean made it a natural link in the transfer of cultures from the Near East into Greece during the millennium that followed. After several centuries of Venetian rule, Crete was taken over by the Ottoman Empire in 1669. After Greece gained its independence, reunification of Crete with Greece became a burning international issue in the nineteenth century. After several uprisings against Ottoman rule and autonomous status between 1897 and 1913, Crete became part of Greece.

Although Crete historically yielded copper, iron, lead, and zinc, only gypsum and limestone are extracted in modern times. An estimated 20 percent of the land is totally unproductive, and 48 percent is used for grazing. The major agricultural products are olives, grapes, carob, almonds, and citrus fruits. The capital city, Heraklion (Iraklion), an important tourist center and port, is twice as large as the next largest city, Chania. Heraklion has been severely damaged several times by Crete's frequent earthquakes. Smaller cities include Rethymno and Agios Nikolaos. For administrative purposes Crete is subdivided into four prefectures: Chania, Rethymno, Heraklio and Lasithi.