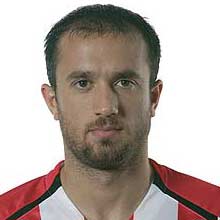 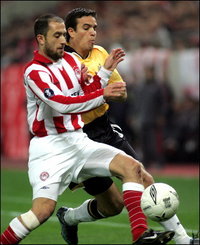 Dimitris Mavrogenidis is a former defender/midfielder.

Mavrogenidis was born on December 23, 1976 in Tashkent, Uzbekistan. He moved to Northern Greece as a child. Mavrogenidis is a product of Aris Thessaloniki, whose first-team colours he first wore aged 17 on August 28, 1994 and for whom he made over 80 league appearances before joining the then champions Olympiakos in 1997.

By the start of the 2006 season, Mavrogenidis had appeared in a total of 270 Alpha Ethniki games with 22 goals to his credit. In July 2006 he signed for Iraklis and returned to Thessaloniki. In 2008, he signed for newly-promoted Thrasyvoulos. He retired after the end of the 2009 season.

A bronze-medallist for Greece at the 1995 UEFA European Under-18 Championship and runner-up three years later in the UEFA European Under-21 Championship, his senior debut with the Greek National Football Team came on October 14, 1998 against Georgia. At the end he was capped 24 times and scored one goal (against Mexico in a friendly match) before losing his place.