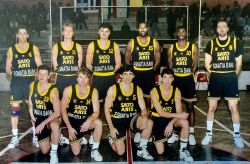 Dinos Angelidis is a Greek former basketball player. His position was either small forward or power forward.

Angelidis was born on April 5, 1969 in Vienna, Austria. He started his basketball career at Sporting BC in 1985. In 1990, he was acquired by Aris Thessaloniki. Over the next nine years Angelidis played for the "emperor" of Greek basketball winning the European Cup Winners' Cup in 1993 and the Corac Cup in 1997. On the domestic front he won two Greek Basketball Cups (1992 and 1998). He served as Aris' captain part of that time. His career was marred by his failure on May 12, 1999, to pass an anti-doping test prior to a game against PAOK which caused Aris to forfeit that game.

The following year Angelidis transferred to PAOK where he played just one season (1999-2000). He also played for Dafni BC before retiring in 2001.

During his career played 81 times for the National Basketball Team of Greece. He scored 645 points. He was a member of the squad that won second place in Eurobasket 1989 in Zagreb, Croatia. He also participated in Eurobasket 1991 and 1995 as well as the Olympics of 1996.