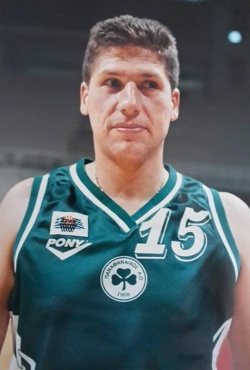 Panathinaikos BC 1997-98 Champions.jpeg Fanis Christodoulou is a Greek former basketball player, a member of the Greek side that won Eurobasket 1987.

Christodoulou was born on May 22, 1965 in Dafni,where he made his first steps in playing basketball. He transferred to Panionios in 1983. On August 31, of the same year, he debuted with the Greek National team. It was the 25th Balkan Championship and the opponents were the Bulgarians (62-51). By the time he quit, Christodoulou amassed an impressive 220 caps scoring 2,269 points for Greece.

Christodoulou starred in Eurobasket 1987 helping Greece lift the trophy after an epic 103-101 OT victory over the Soviet Union. He also won the silver medal at Eurobasket 1989 and took the 4th place at the 1994 FIBA World Championship and the 5th place at 1996 Olympics.

Playing for Panionios BC, Christodoulou won the Greek cup in 1991 and he was named MVP of the final. In 1997 he transferred to Panathinaikos and won the Greek champinship. After that he quit playing basketball in 1998. He is a member of the Greek Basketball Hall of Fame.