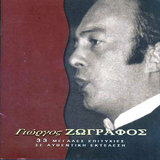 Giorgos Zografos was a Greek singer, mostly associated with the Neo Kyma genre.

Zografos was born on August 4, 1936, the son of actress Aliki Zografos. After graduating the Karolos Koun Drama School for Theatre, he started his career as an actor. He then went on to continue as a singer. In 1962-63 he would appear besides Dimos Moutsis, Dora Giannakopoulou and Dionysis Savvopoulos at the club Symposium in Plaka, Athens.

He is considered one of the most important representatives of the Neo Kima (Νέο Κύμα meaning New Wave) form of music that arose in Greece in the 1960s.

On Friday, August 13, 2005, Giorgos Zografos was found dead in his apartment where he had been living on his own. A friend of his, who had not heard of the 69-year-old artist for a fortnight, went to his apartment at 5 Semelis Str in Syntagma, central Athens where he felt an intense foul smell and immediately called the police and a locksmith. The policemen found his dead body in advanced decomposition.

Some of his Songs