From Phantis
(Redirected from Giovanni)
Jump to navigation Jump to search 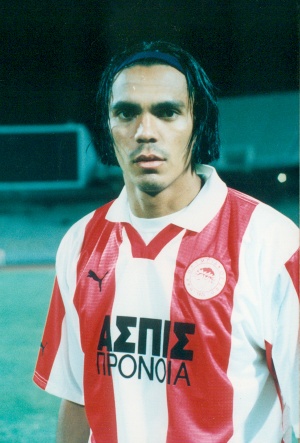 Giovanni Silva de Oliveira , surnamed Giovanni ', (born February 4, 1972 in Abaetetuba) is a retired international football (soccer) player from Brazil. He played as a forward in Greece for Olympiakos in the Alpha Ethniki and also for Ethnikos Piraeus in the Football B Division.

Giovanni started his career in 1991 at Tuna Luso. In 1993, he scored 24 goals, before joining Remo and Sãocarlense before moving to Brazilian top club Santos in 1995. Pele paid himself for his transfer, and proclaimed him as the "new Pele". In his first season he scored in half of the games he played, while in his second he claimed 25 goals in 19 games. After a great career in Santos FC, he moved to Spanish giants FC Barcelona in 1996. He was a first team regular for two seasons and scored 18 goals overall. Barcelona fans still remember him for his tendency to score game winning goals against Real Madrid.

He moved to Olympiakos FC in the summer of 1999 and soon established himself as one of the most prolific scorers in the Greek league. A flamboyant and temperamental player, he was loved for his amazing talent to dribble and lob the ball over the goalkeeper.He has been thought to be one of the most technical player in the world. Using both feet and having excellent control skills and unbelievable imagination in his moves Giovanni is completely unpredictable and fascinating. His skills earned him the nickname "magos"(means wizard) in Greece.

He was the leading goalscorer in Greece in the 2003-2004 season with 21 goals. After six seasons he left the Piraeus club in 2005 to return to São Paulo and Santos FC.

In the beginning of 2006, he signed a one year contract with Saudi Arabia leading team Al Hilal Club was thought to be the last stop of his career. However, on August 15, 2006, Giovanni Silva de Oliveira signed a one-year contract with 2nd division Greek club Ethnikos Piraeus for 400,000 Euros, returning to the stadium primarily known as the Olympiakos' home turf, the Karaiskakis Stadium.

After his second stint in Greece, he returned to Brazil and played three more seasons closing out his career at Santos FC.

Giovanni received the "Brazilian Golden Ball" in 1995. In 2000 he was nominated as "Best foreign footballer in Greek championship".

Giovanni had 20 caps with the Brazilian national team (6 goals) and played during the 1998 World Cup.